Footwork is an integral component of every athlete’s repertoire. Whether you’re the great Serena Williams returning a serve with the strength to stagger any superstar opponent, or the New York Jets’ LeVeon Bell slicing through seams with sneaky strides — it all starts from the ground up.

For the University of Southern California’s sophomore sensation Alissa Pili — and most every basketball player — footwork is just as important to her as it is to a tennis phenom or a Pro Bowl running back. 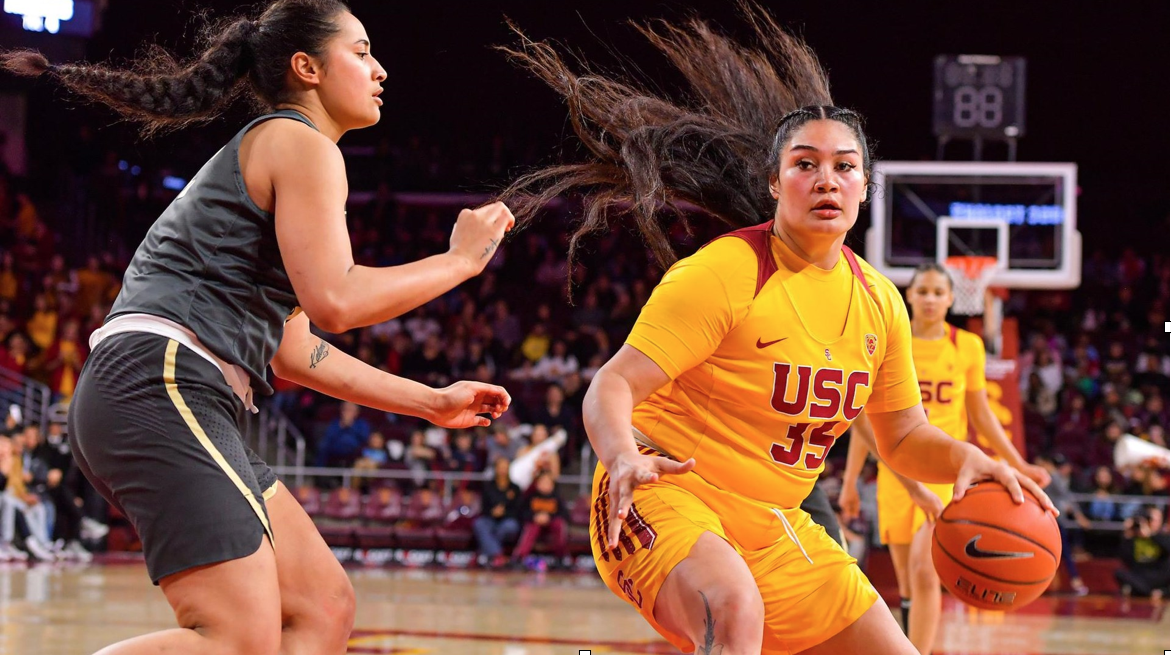 Last season, Alissa Pili joined the pantheon of USC greats who have won Pac-12 Freshman of the Year, including the likes of WNBA legends Lisa Leslie and Monica Lamb. (Photo courtesy of USC Athletics)

Pili, of Dimond High School fame, nabbed Pac-12 Freshman of the Year honors last season after a breakout freshman campaign firmly established her as one of the brightest young post players in college basketball.

Pili’s breakout season averaging 16.3 points and 8.0 rebounds per game while shooting 51% from the field is a direct byproduct of her elite footwork allowing her to get anywhere she wants to on the floor.

Even before she committed to USC last year, scouts on Pili’s ESPN profile took notice of her feel for the game as far back as 2016, writing that she has “nimble footwork” and “skilled in the paint, with soft touch in the key.”

But how did Alissa Pili come to hone such a skill that only the most special talents seem to have?

The secret is how she trains.

Since Pili was a child, her biggest rival was her older brother Brandon Pili, who also plays for USC as a defensive lineman on the football team. Pili not only competed with her brother Brandon, but her cousins as well, who were also multi-sport athletes.

“I go to the football field a lot with my brothers and do ladders and sometimes I’ll even do some of their football drills to get some footwork in. Also, I just do a lot of reps of the moves [that] I want to perfect and focus on getting the footwork right, so I can execute them when I play [in games],” Pili said.

Thanks to the intense emphasis football training has on technique, Pili developed a keen attention to detail towards footwork and nimble feet, courtesy of a childhood spent playing backyard football.

Pili has always trained with a focus on footwork, but it was only until recently she said that she began to study film on athletes like NBA legend Hakeem Olajuwon, who are known to be footwork savants.

Like Olajuwon, Pili is a maestro at maneuvering around defenders and scoring in a plethora of ways. Pili’s knack for hitting a variety of tough shots starts with her footwork that allows her to keep her body under control with a firm base and “stay balanced while making a move,” she said. Pili’s strength in tandem with expertly executed footwoork and a keen feel for the game is a combination that explains why she has been an absolute juggernaut for the Trojans.

“Footwork is a huge part of the game that will help you succeed on the court. Everything starts with footwork.”

Pili describes footwork in her own game as equally important on both ends of the floor, “from executing moves on offense, to staying in front of someone on defense.” In scenarios where Pili knows she needs to get a bucket for her team, she leans on the footwork of her go-to move: a well placed step-through layup after a pivot and a spin move, she said.

For any basketball player regardless of skill level, Pili stresses the importance of training with a focus on one’s footwork, calling it “mandatory if you want to become a better player.”

While not everybody grew up with a sibling that went on to play college football to train with, Pili recommends “doing ladder drills and getting a lot of [footwork] reps in,” in order to improve one’s own footwork.

However, the quality of those reps need to be up to par as well, she said.

“The only thing I would say is to make sure you get quality reps in and focus on getting the footwork right before you try to speed things up.”

Joey Carrreon is a Filipino-American journalist from Anchorage, Alaska whose work can be found in the Anchorage Daily News, The Spenardian, and The Northern Light.

Joey graduated from the University of Alaska Anchorage with a Bachelor of Arts in journalism and public communications and is passionate about basketball, food, pop-culture, and the oxford comma.